So, it’s only taken since Christmas, but last week I finally finished reading Crime and Punishment on the Kindle. For anyone unfamiliar with the premise, you can read a synopsis and background here. Rather than cover that well-worn ground, I’ll attempt to give my own impressions of this most serious of novels.

This is not an easy read. But you knew that. Yet, it’s not the language or themes that are difficult to grasp, more the unrelenting gloom and paranoia which make it a hard slog. There is poverty, despair, madness and brutality here in abundance. To counteract this, I had a preconceived notion that remorse and redemption would play a large part. I was wrong. There is a surprising lack of genuine remorse shown by Raskolnikov for his crimes. Only at the very end does he seem to undergo a spiritual transformation but even then it is underexplained given all that has gone before.

What kept me reading was the acute psychological portrait of a man in turmoil. It is a visceral portrayal of anguish and yet Dostoevsky keeps his character poised between narcissistic anti-hero and pathetically misdirected intellectual. As with Notes from the Underground,  it is his ability to empathise with and articulate the vicissitudes of the human condition that stands out.

The political and social condition of Russia at the time is important in adding context to Raskolnikov’s actions (any introduction to the text will explain this much better than I can!) and the city of St Petersburg, in all its filth and squalor, is a character in its own right albeit one that I was happy to say goodbye to by the time I’d finished.

Overall, I found it one of those novels that I admired rather than enjoyed.

Am I being too severe on this classic?

By now, most book lovers will have faced the great question of our age, “To Kindle or not to Kindle?” (or “To e-booker reader or not…” if we’re to be brand neutral.) I was firmly in the ‘not’ camp until I got one as a present, which I suspect is a familiar tale. Do I feel compromised? Have I let books down? Am I killing the thing I love? Well, I hope not. You see, the darn device is just so alluring. And portable. And easy to use. And you get to look smug on trains. In short, reader, I love it. 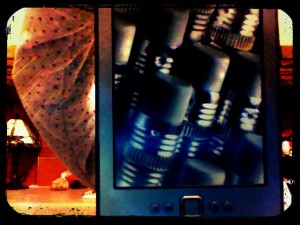 So, what have I read on it so far? The usual assortment for eBook beginners, I imagine. A few murder mysteries – Agatha Christie, Sherlock Holmes, some Jane Austen, Dickens. In other words, lots of out-of-copyright and therefore free, content. I’m already a big fan of the classics, although I readily admit I’ve a lot more ground to cover, so the Kindle is a perfect way to explore lots of titles at the click of a button. I also love the sample feature and have used it to check out some bestsellers before taking the plunge.

For me, it’s all about usage. I like having my favourite titles with me wherever I go, but I won’t be throwing away the originals. It’s more like a handy, back-up library. I can try daunting classics on a whim and for newer titles it’s a ‘try before you buy’ thing. I’m sticking with the basic model for now. I fear the glitzy distractions of the Kindle Fire and other tablets would prove too much. As for ownership issues and whether a download should give you more rights than a mere licence, it’s all a bit murky and a debate I’ll leave for another day.

I’m ploughing my way through Crime and Punishment on the Kindle at the moment which got me thinking about some of the other Russian novelists I’ve read (ok, all two of them). I must admit, I’m really enjoying it and there’s something about the character of old Russia itself which is mysteriously appealing to a Westerner. It’s not just the exotic names but also the historic element and the social turmoil which provides such a dramatic backdrop.

The only other Dostoyevsky I’ve read is Notes from the Underground which I picked up because (a) it was on sale, (b) the name sounded familiar and (c) I liked the cover. What struck me with that novel was the startlingly realistic narrative voice which sounded so modern for its time (it was written in 1864). He writes at times in the manner of a conversation between narrator and reader, second guessing and openly pre-empting the reader’s reactions and thoughts. These insights are so acute that I would only have to read on a few lines to find him putting into words the very thing I was struggling to phrase in my mind. Rather than find it too knowing, I enjoyed these psychological observations and the feeling of being united with another mind across time and space. Which isn’t meant to sound as pompous as it does.

So, having enjoyed Notes, I thought I’d tackle a better known work. Crime and Punishment shows the same understanding of human nature but in even more extreme conditions. I’m only about half way through although one of the drawbacks of an e-reader is not knowing at a glance how much more is left. I’ll post some thoughts when I finish.

On a similar note, I’m very excited about Joe Wright’s forthcoming adaptation of Anna Karenina, which was my first venture into the Russia novel and the reason why I decided to give Dostoyevsky a go. It immediately became one of my all-time favourite novels so I hope it lives up to his previous films (Atonement, Pride and Prejudice…) The recently released stills look stunning. I’m also really interested to see what they do with the Levin character, who is the real hero for me. Anyone of a romantic disposition should check out his proposal to Kitty. *gulp*